It is with great pleasure that I get to tell y'all about one of my favorite adventures so far! I went to Halberstadt on the last Wednesday and Thursday in February, and was totally blown away by the cathedral and its museum!!  Halberstadt is only about 30 miles from Wolfenbüttel, but it is located in former East Germany. Despite its closeness, it takes about an hour and a half by train because there are no high-speed routes. So I woke up early on Wednesday to begin my journey!  I had been in contact with the director of the museum, so they were expecting me and had already granted my request for photo permission. So I arrived and gave the front desk my name, and was warmly welcomed and then shown to the textiles!

Mega wow! The two main pieces I was interested in were a large altar cloth (which lays like a table cloth over the altar) and an antependium (which hangs in front of the altar). Both were made in the late-thirteenth/early-fourteenth century, but neither of them are positively attributed to a specific workshop, so instead are labeled as coming from Lower Saxony in general. The antependium is worked in all sorts of fabulous stitching techniques on a linen cloth, and appears to be embroidered mostly in linen as well. The neutral color palette also draws specific attention to the stitches, because there are no dazzling colors to distract you! Many of the saints aren't identifiable at first glance, but the mythical creatures, super geometric patterns, and crucifixion scene at the center are total eye candy! 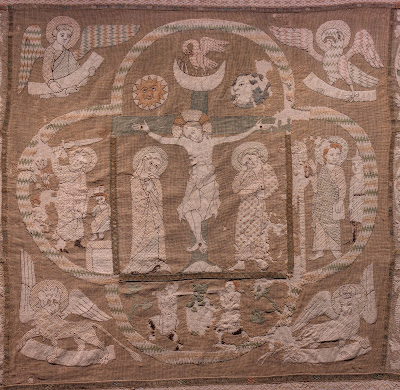 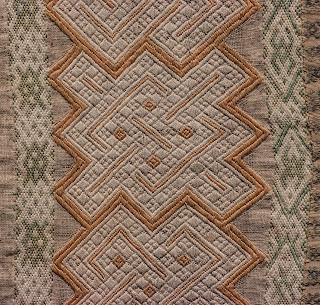 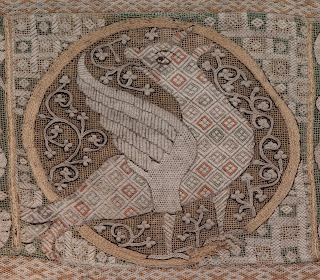 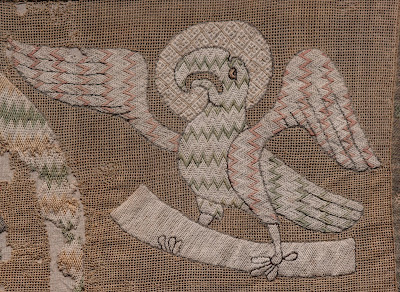 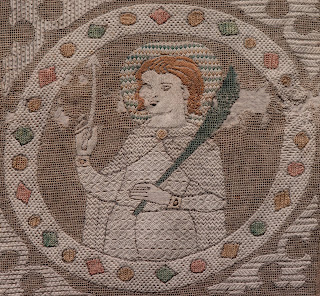 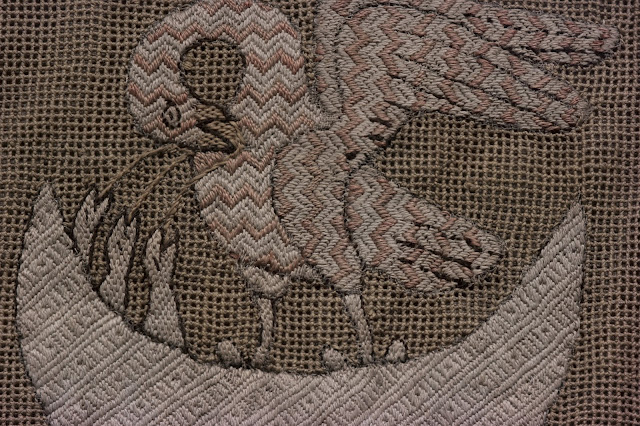 The altar cloth was harder to photograph because I couldn't get high enough above it to have a great angle, but the guard on duty helped me scoot over a bench so I could raise my tripod a bit for at least a slightly better vantage point. With some of the same stitches as the antependium, the altar cloth adds shimmering silk threads and bright colors! Sooo fun! 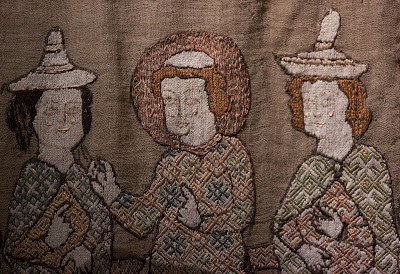 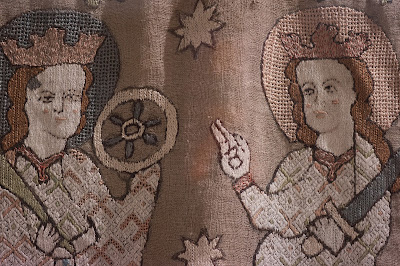 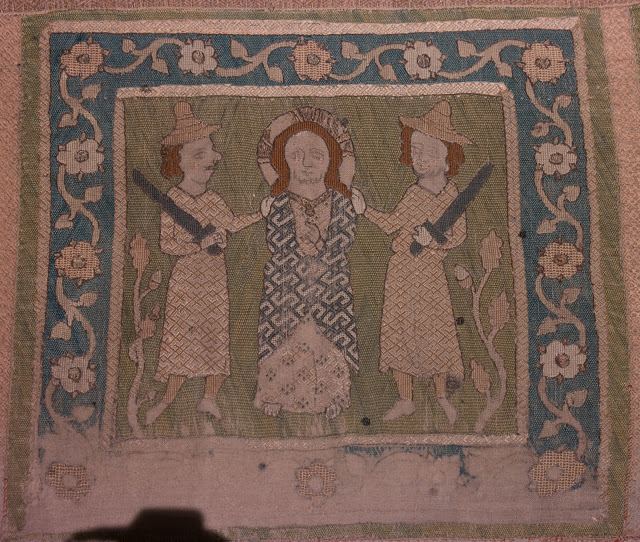 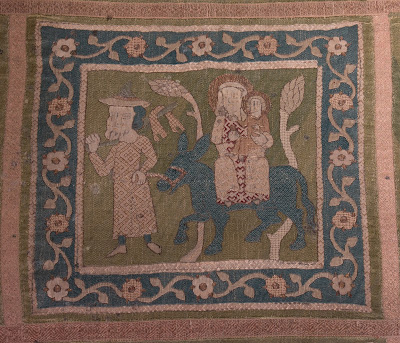 Another thing I have started noticing in my photos is the use of gold threads. I have always known they used gold threads, but never really thought about how these threads were made. With macro photography, we are able to see that the gold is hammered until very thin and then cut into teeny ribbons and wrapped around an existing silk, linen, or even sinew thread! Genius!

The altar cloth also has a small border that hangs over the front side of the altar which is entirely beaded and bedazzled in the best way possible. The twelve disciples are rendered in shimmering glass beads, pearls, and golden paillettes. They were so fun to photograph and process with a technique known as focus stacking, so I can use the most macro of lenses and still get a fully focused field of view. 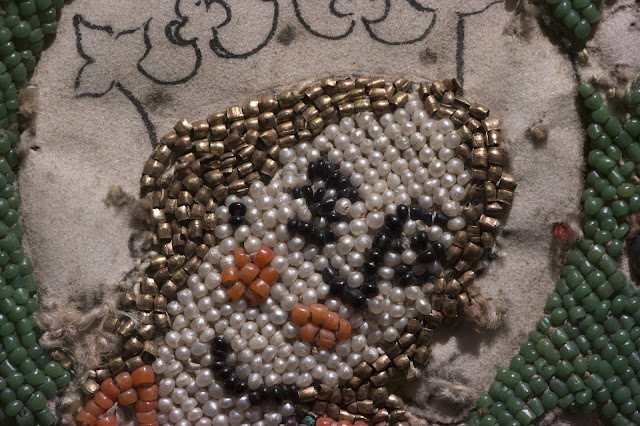 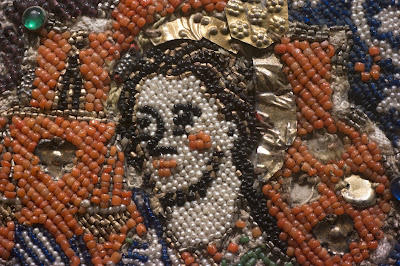 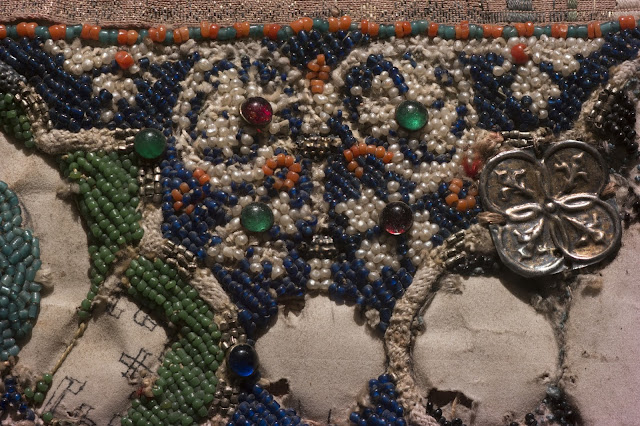 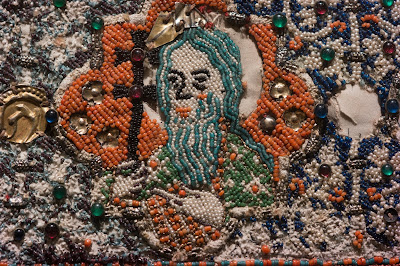 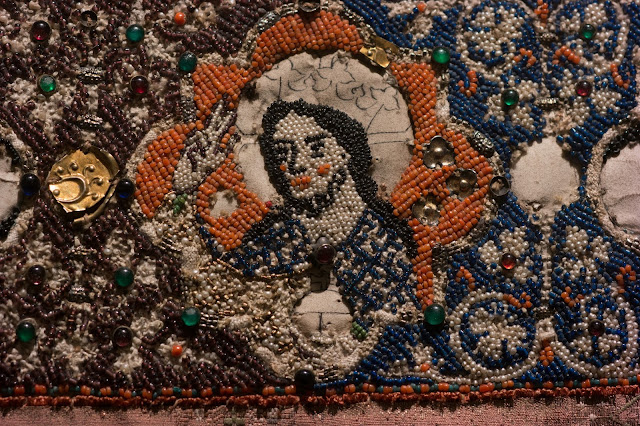 So on Wednesday, I took a short lunch break to grab a sandwich at a nearby cafe, but otherwise spent the entire day photographing these two embroideries. My feet were tired and my back was stiff, but I felt so triumphant! These objects were so stunning and exciting that the day flew by! It was also the best "Deutsch Day" I've had since crossing the Atlantic. I understood everyone, they understood me, and I spoke only German from the moment I woke up until the moment I returned to Wolfenbüttel! I chatted with the museum guard and interested museum-goers all day! I was really on a medieval art historian and language-learner high that night!!


I woke up early again Thursday to do go back for seconds in Halberstadt! I started Thursday by visiting the Liebfrauenkirche, a Romanesque church right across from the cathedral. The cloister and architecture were totally stunning, but much of the inside is plain or blocked from visitors. 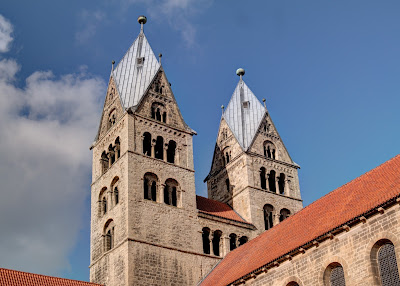 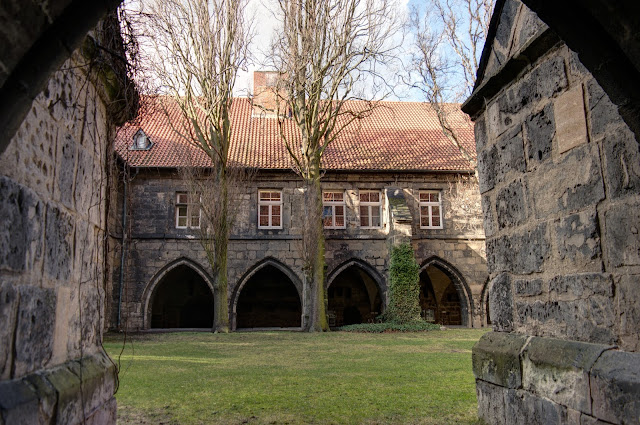 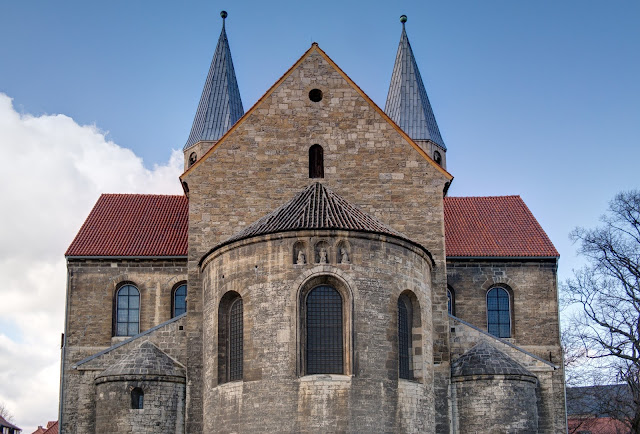 Next stop was the cathedral! Talk about an underrated place. Wow. Until Halberstadt, my favorite cathedral I've seen so far was probably Cologne (here is the link to Cologne blog post). The portion in Monuments Men where they are rescuing the "Bruges Madonna" from the "St. Bavo Cathedral in Ghent" was actually filmed in Halberstadt cathedral! Cool, huh?  For just €2, you can take photos in the cathedral and I was totally happy to oblige! The soaring arches and vaulting, the colorful stained glass, and especially the so-called Triumphkreuzgruppe (triumphal cross group) were totally awe-inspiring. I could have spent an entire day just peaking around corners and staring up at the ceilings in the cathedral! 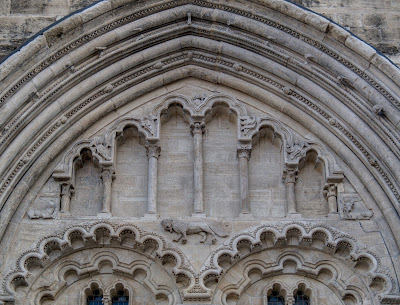 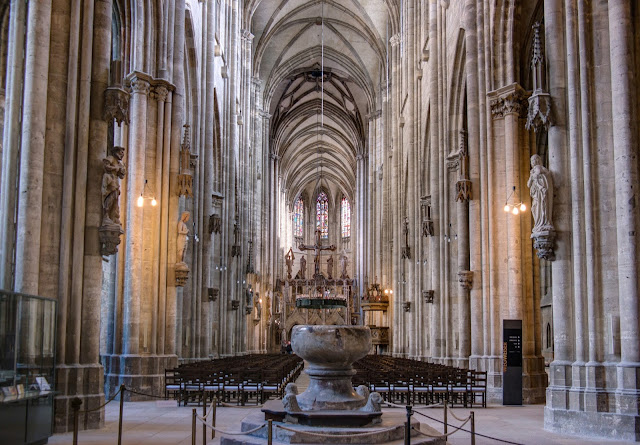 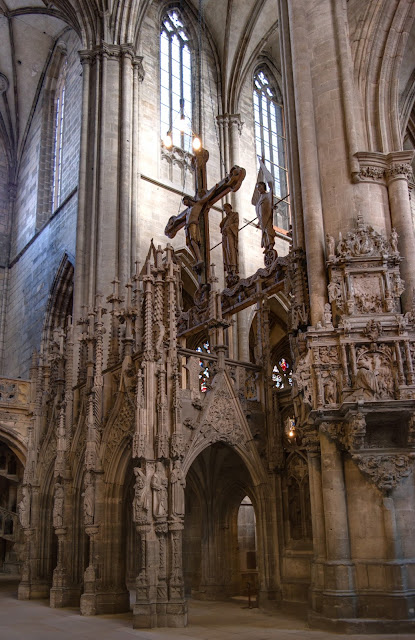 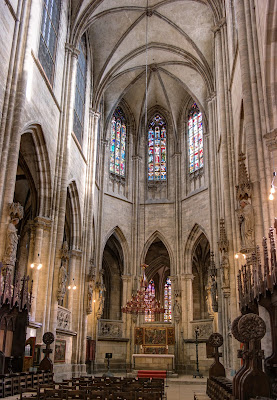 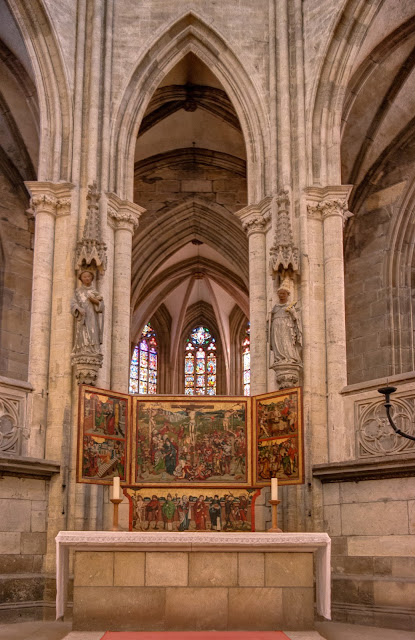 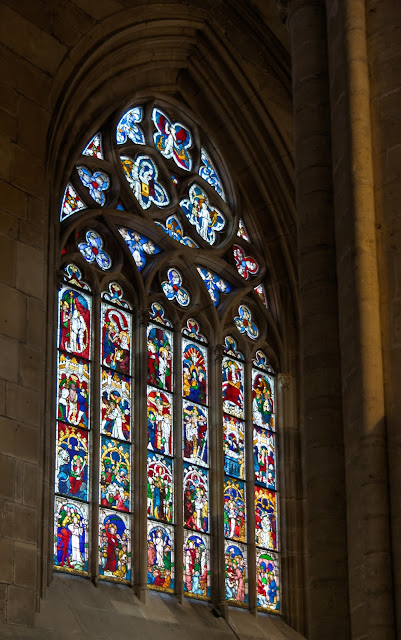 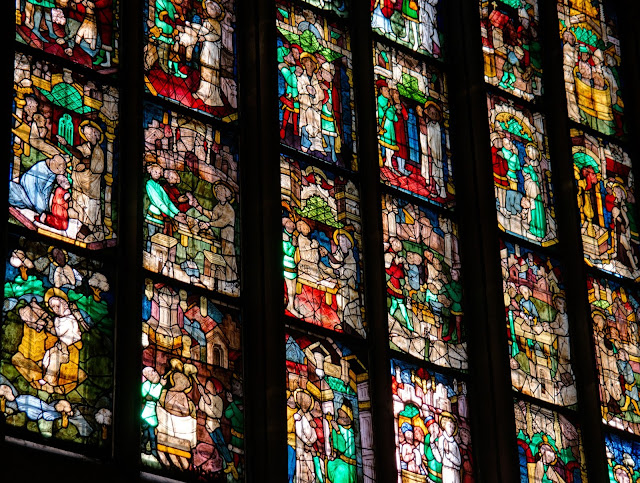 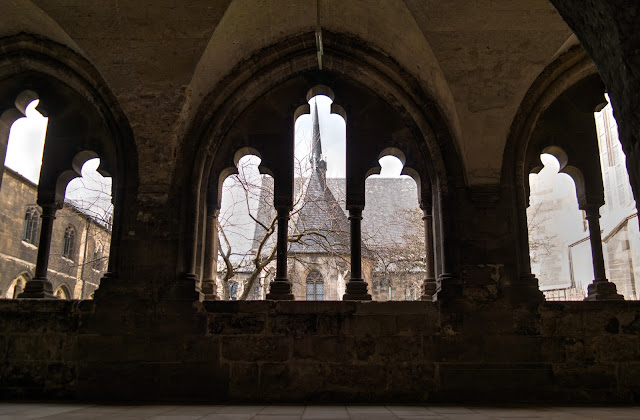 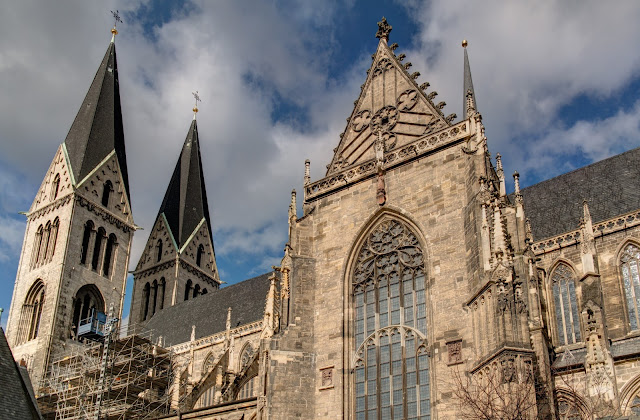 I eventually pried myself away, and went through the cloister back into the museum to get back to work. I worked faster Thursday to photograph the rest of the textiles on display: a few fabulous tapestries, knotted carpets, and a room full of outrageous clerical vestments!


Thursday was not the best Deutsch Day ever, but I suppose new languages come and go just like good and bad hair days... But after these two days, I was so invigorated by what I do. It really is the best life for me, y'all. The patterns, colors, textures, and images from the Middle Ages, especially when carried out in the fiber arts are some of my very favorite things. So next time you want to refer to something particularly barbaric or horrific as "so medieval," or you're tempted to use the greatest misnomer of all times (Dark Ages), these images will help you understand that perhaps the Middle Ages weren't so "Dark" after all.